Time it started 13.8 billion years ago, when the Big Bang occurred. Since then time has played a significant role in our lives. In physics to measure things and time passing slower near black holes. In chemistry the original time is defined by the electrons transition in a cesium atom. Without time we wouldn’t be able to exist. Throughout the years the way we look at art and how we interpret art has changed. The different styles in which paintings are made, but also the techniques that are being used to create works of art. We started with analog techniques and involved to a digital age which made it possible to express our feeling in ways which we could have never imagined. Time also is affecting the works in matter of degradation. Moreover a painting will get destroyed after a certain amount of time when the care for this painting gets neglected. In most cases this is not the intention of the artist, but sometime the artist has the intention to let time do it’s thing.

Why do woodpeckers never get a headache?

The woodpecker is a small bird originating from the Picidae family. Members of the Picidae family are found all around the world mostly living in the forest or woodlands but some of them are found in treeless areas like the desert. We all know the most characteristic feature of the woodpecker, drilling into a tree. They use their beaks to find percusion cavities and areas of disease in which insects may hide. Not only do they use their beaks for gathering food they also bore into a tree chiseling away bit by bit to create their nesting hole.

Paper: Why do woodpeckers never get a headache?

Do people who live in green neighbourhoods vote greener? The presented research was carried out to investigate the correlation between the greenness in the neighbourhoods of Utrecht and the actual votes on green political parties in the local elections in Utrecht in 2014. Relating to priming theories we propose that greener districts also vote greener. However, the results of our study contradict this hypothesis. The results are nevertheless very interesting since they show the exact opposite of our hypothesis. A strong significant negative correlation was found between the greenness of a neighbourhood and the voting for the green party GroenLinks. The residents of the less green neighbourhoods thus vote greener.

For this course I created a video to explain the flat earth conspiracy, with a view through the eyes of old philosophers.

Transcription of the video: Space is one big void where we as earth seem to be really small. This void would kill us without the atmosphere locking in the oxygen and keeping out the harmful radiation. But is this how the earth survives? According to the flat earth society, there is no atmosphere protecting us but instead, there is a dome over the earth just like a snow globe. This impenetrable barrier keeps us safe for all that’s harmful. Now I see you wonder how did the rockets from NASA leave the atmosphere on a path to the moon or the satellites providing us with the Global Positioning System. The FES Says that NASA is fake and we have never shot a rocket to space. What about all the pictures and video’s of the earth are those real or just a way to influence the people. The flat-earthers don’t believe all the stories told by the big corporations, they don’t believe in how relativists justify their action or prove if something is true. If we can’t observe the phenomenon with our own eye’s we can’t believe it’s true.

To give another example the first theory about the solar system was created by Ptolemy. The geocentric system where all the planets and the sun rotated around the earth in perfect orbits. All the theories he created were predictions and could not yet be observed. Later on, Copernicus came with the theory of a heliocentric system(a system where the earth is not in the center but the sun is), backed up by Brahe and Kepler but still all theoretical. With the invention of the telescope, Galileo could confirm that indeed the planet rotated around the sun. Providing information for Newton to create the laws of gravity. The flat earth society claims that Newton was just talking nonsense because Einstein invented the theory of relativity proving Newton wasn’t completely right. The flat-earthers only believe that something is true when it is observable and close to reality. Whereas the round-earthers believe in the scientific community. If a big group of people agree on the same thing it is true for now till proven wrong, this is how knowledge advances. The same with the view on the solar system.

For this course I had to give a presentation about two computers that were trained to play a game against a human. Deep Blue is the chess computer created by IBM who beat the grand master Garri Kasparov, on that day the best chess player in the world. AlphaGo is a computer program created to play the Chinees game of Go and was able to beat the best player Lee Sedol.

To show how the sawtooth is created and how it progresses with the addition of more sine wave I’ve created a flipbook. With this method I’m able to show step by step how the multiple sine wave gradually transform in the “perfect” sawtooth (for a perfect sawtooth we need N to infinity). I choose the flipbook because it is a great way to show a sequence, furthermore it gives you the ability to the move forward, backward and stop at any point of the series. Also a flipbook is easy to use for everyone. My end goal is to show how this mathematical function (Fourier Series) progressively changes a sine wave into a different wave for in an interactive way. 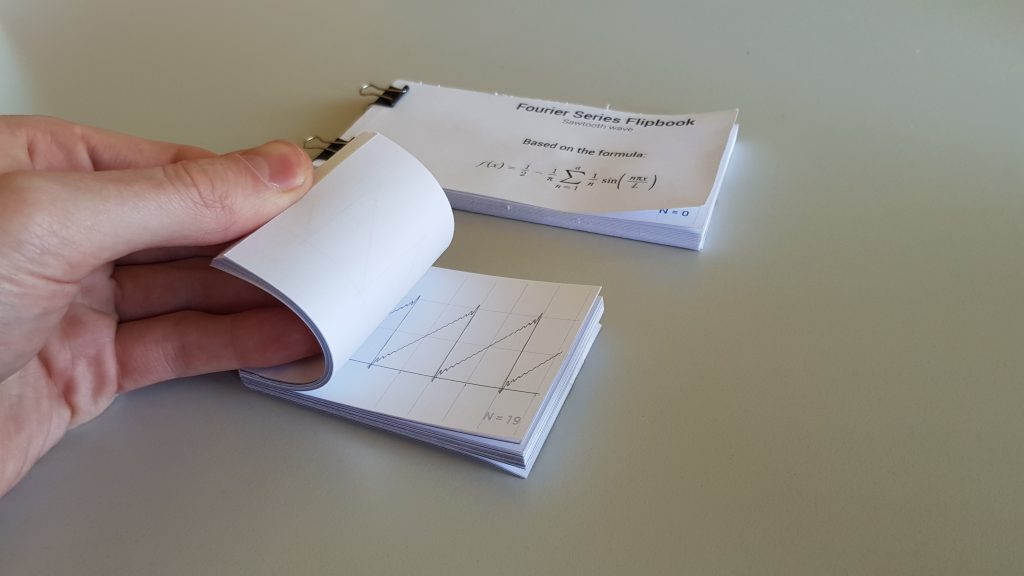 The step towards artificial natural language

Contrary to other baleen whales, humpback whales have unique behavioural and morphological adaptations which allow them to exhibit their unique and complex feeding behaviour known as bubble-netting. This involves expelling air underwater to form a vertical ring of bubbles around prey. Currently, all the evidence is based only on surface observations, this study provides the first quantitative descriptions of sub-surface behaviours; providing detailed kinematic descriptions, and quantitative analyses of the behaviour patterns.

Bubble-nets: rings of distinctive bubbles at the surface in a closed circle or in the shape of figure 9

Human evolution a process that proved itself to work in an efficient way, solving the problems given by the universe. After many generations, humans learned to survive on this earth by adapting themselves to withstand the harsh conditions thrown at them. Developing a way to communicate with each other and learned how to make fire. But not everyone survived the less fit among the population are the most vulnerable, therefore more likely to die first. The remaining population will produce the new offspring, the humans of the future. Genetic algorithms are based on human evolution in order to solve a given problem through selection, mutation and recombination or in other words crossover. All the fundamentals of the human evolution form a basic genetic algorithm.

Evolutionary strategies a subdomain of evolutionary algorithms which is focused on the continuous numbers. Evolutionary strategies a search paradigm inspired by human evolution mostly used for continuous black-box optimization. Solving problems by creating a population, recombining them into new offspring, mutated and evaluated to be formed into the new population. Which after multiple generations will come closer to solving the given problem. In this practical assignment, I try to explore the different possibilities of building an evolutionary algorithm. Such as recombination, mutation but also the different self-adaptive algorithms.